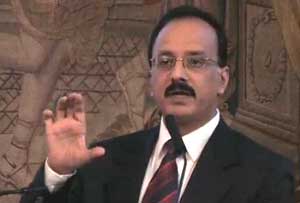 This is a talk about the GMO situation in India, and the world. It was held at a debate arranged by The Norwegian Biotechnology Advisory Board, titled "Genetically modified food - needed to ensure world food supply?", on the 22. November 2010. In short: In relation to GM crops the GMO-industry has failed big time. The solution is sustainable agriculture without chemicals and GMOs. These are the words from Devinder Sharma (journalist, researcher and political analyst) which actually has some vital information to share.

The Biotechnology Advisory Board have now managed to lose all the video's from this important debate. Even after several inquiries towards the Advisory Board they claim they do not get any response from the person that filmed the debate. Not easy to understand why it should be such a difficult task to get in contact with that person and then republish all the talks? Anyway, after searching Google for: "devinder sharma oslo", then I found a copy on Devinder Sharma's YouTube channel (2014-12-20):

You can see the other videos from the debate here